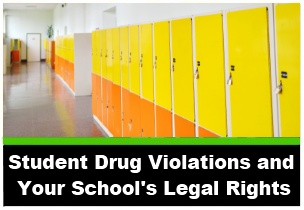 
Please CLICK HERE to contact Jim Knight – Vice President of Education to setup a bulk rate for teachers in your school.

Student drug use is a threat to student learning in schools – not to mention a threat to the safety and security of students and staff.  A lack of knowledge of the law puts educators at one end or the other of a dangerous spectrum of adult reaction.
On one end, adults overstep their legal role and conduct illegal searches of students (exposing the school district to very expensive lawsuits from angry parents), or teachers and administrators become so afraid of being sued that they do nothing to keep drugs off of their campus.

This series of five online professional development courses empowers teachers, administrators and school board members. It provides them with an investigative system to use when making the decision to suspend, expel or prosecute a student for drug violations. This approach can also be used to investigate ALL OTHER TYPES of student code of conduct violation cases. The benefit for the school is twofold: #1 – by learning to more effectively investigate ALL TYPES of student code of conduct violations, #2 – schools save money because they reduce the risk of being sued civilly for violating a student’s rights.

These guidelines have been shaped by rulings made by the United States Supreme Court (as well as district and appellate courts) on the subject of student searches, reasonable suspicion, probable cause, random searches, school district drug policy, and civil liability.

This new course series was developed and designed by Jim Cleary and Shannon Holden.  Jim was a former Assistant City Prosecutor and Criminal Defense lawyer in Kansas City Missouri, and also a published author of the book series Busted At School (Student Drug Violations and What The Courts Say Part One).
Shannon Holden is the current Vice Principal of a Missouri Middle School and an Adjunct Professor at Missouri State University, in addition to winning numerous awards from EdWeb.com for his record breaking webinar series taken by teachers across America.

Chromebooks in Education
Scroll to top